The Tesla Model Y are made by an army of robots, the proof in video - DALTONHURD Skip to content 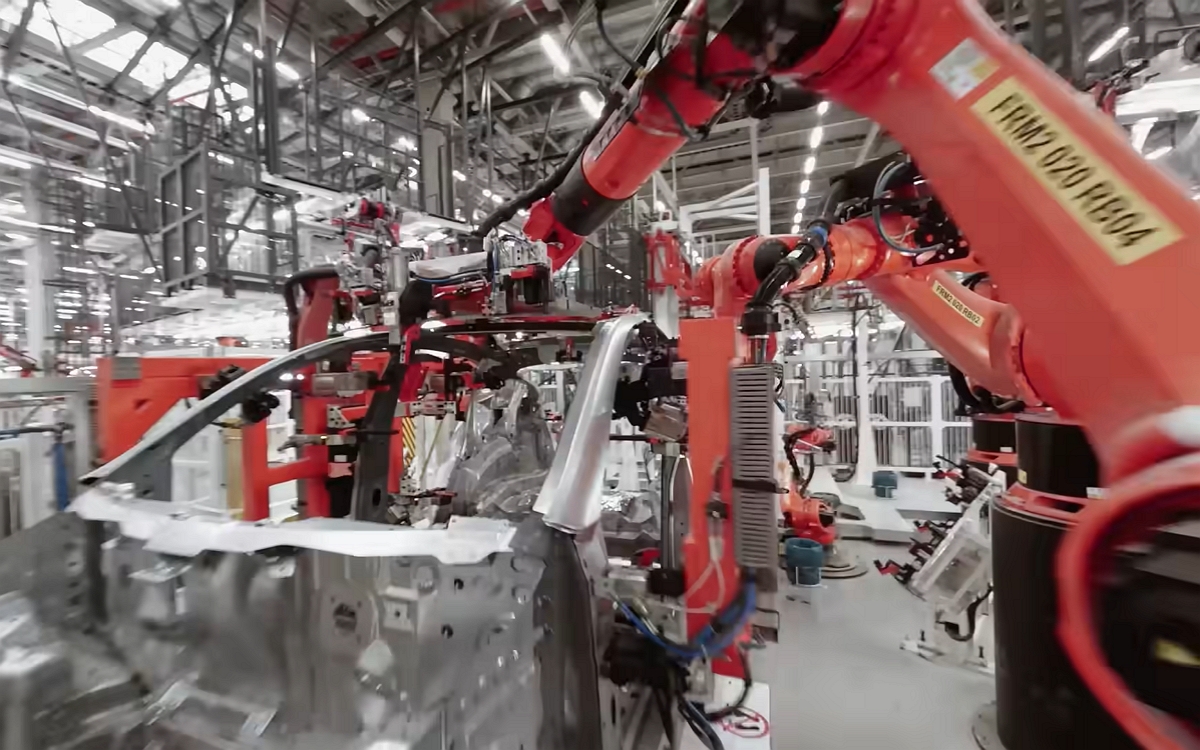 The new Gigafactory in Berlin has just opened its doors, and this is the opportunity for Tesla to give us a glimpse of the impressive, almost fully automated manufacturing process of its Model Y SUV.

As you probably know, Tesla makes a point of automating everything that can be automated during the manufacturing of its vehicles. In a new video of nearly 3 minutes, Tesla takes us closer to its huge machines in charge of production of the Tesla Model Y at its new Gigafactory in Berlin. For this, Tesla did not hesitate to use a tiny drone capable of sneak through the ballet of robots. We discover state-of-the-art machines that each take care of a small stage of production.

The pilot has not been named, but it would be Ferdinand Wolf, a member of the Skynamic team who had previously filmed videos for Tesla. The drone used would be a small cinewhoop type quadcoptera versatile device designed especially for the type of tight spaces and tight turns.

Also to be read : Tesla could be worth 4 trillion dollars by 2030, more than Apple today!

After a tour of the German Gigafactory parking lot filled with freshly made Tesla Model Ys, Tesla takes us closer to the machines responsible for the production of the Model Y, its compact SUV. At the beginning of the assembly line, we first discover Tesla’s brand new flagship machine which greatly simplified the production of the car: the Giga Press.

This enormous machine manufactured by the Idra Group in Italy is responsible for die-casting a molten metal alloy inside a reusable mould, which makes it possible to manufacture the main body parts of the Tesla in just a few seconds, whereas previously several hundred parts had to be assembled. They are known to be the largest die casting machines in the worldwith a clamping force of 55,000 to 61,000 kilonewtons.

The drone then follows several KUKA and Schuler robotic arms which skillfully assemble the different parts of the car. As we can see, each operation is controlled by company employees, but these only occur when a process requires too much precision to be carried out by a robot. The cars then pass through Tesla’s brand new paint shop, before the final elements are assembled and the cars are ready for delivery. As a reminder, Tesla made its first deliveries of Tesla Model Y produced in Germany at the end of March 2022.

The compact SUV is already one of the most popular cars in Europe. Just after its launch, it already dominated sales of electric vehicles with 6,729 registrations in Europe in February 2022, according to figures from the research firm JATO Dynamics. We let you discover the incredible visit of the GIgafactory below.

Berlin’s Gigafactory is Tesla’s only factory in Europe

Thanks to its new plant in Berlin, the American car manufacturer reduce the amount of transportation needed for Tesla vehicles to reach customers in Europee. Its Tesla Model Ys have until now been imported from other factories around the world, including the Gigafactory in Shanghai.

In addition, the plant should allow the American automaker tosignificantly increase its volume of vehicles produced during the year. Indeed, Tesla hopes to manufacture nearly 500,000 new vehicles each year at its plant, more than half of 2021 sales which have almost reached one million vehicles.

In the first quarter of 2022, despite significant difficulties that forced the giant to reduce production rates, Tesla still set a new record by shipping more than 300,000 electric cars. Now that the plant is starting to produce cars, the number of sales is expected to increase significantly in the coming quarters. All in all, it should be remembered that the Gigafactory in Berlin would have cost more than $5 billion to build, and employs nearly 10,000 people.