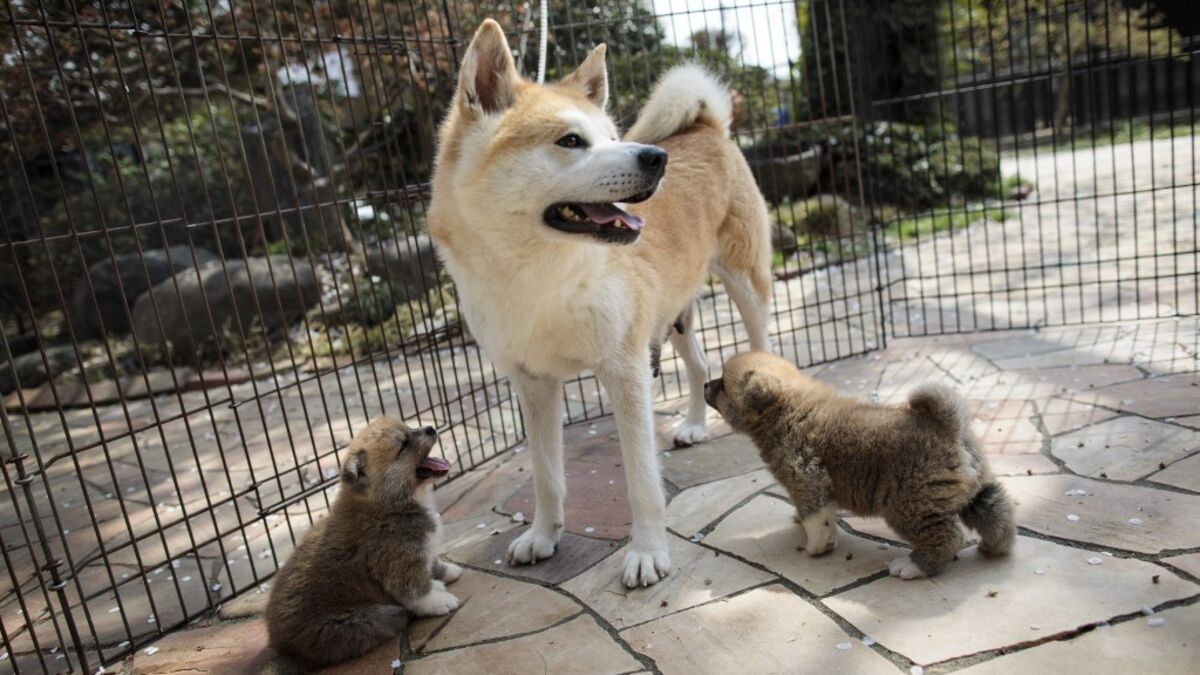 Tokyo, Sushi, Mikado, Skimo… names that have become common to baptize dogs coming straight from the land of the rising sun. In recent years, Japanese dogs have clearly won the hearts of the French. It has even become a real fashion phenomenon, and if we can only rejoice to see these beautiful beasts in the streets of Paris, be careful not to do anything with these very old breeds.

Of the dozen existing Japanese breeds, three are no longer really confidential: first there is the Shiba Inu, which means “little dog”, which rarely exceeds ten kilos, and is noted for its vulpine look, its coat stuffed animal and its tail curled into a corkscrew on the lower back. Then we have the Akita Inu, clearly the size of the top, pointed ears, short hair, often sesame coat, and finally the American Akita, which as its name does not indicate is indeed from Japan, before d to have been imported into the United States after the Second World War. It comes from crosses between the Akita Inu, German shepherds or molossoids to accentuate their power and their fighting spirit.

More than a year of waiting

Fleur-Marie Missant, deputy director of the Centrale Canine, is formal about the current craze: “The Akita has a steady growth; for the Shiba, it is exponential. In 2011, there were 360 ​​registrations in the LOF (book of French origins); in 2021, there are 2,691, with an increase of +29% between 2020 and 2021”. Farms have multiplied to meet this demand (for better and for worse). Despite this, the waiting time to get a Shiba remains long: more than a year and a half generally! So the unscrupulous import channels of Eastern European countries are running at full speed. We can never stress enough the importance of the origin of his animal. Gone are the days when to have a Shiba, we went directly to look for it… in Japan! (Natsu, the dog of youtuber Squeezie, made this trip).

Why this fashion? The search for exoticism and originality, but also the passion for Japanese culture, manga or video games, explain the popularity of these breeds today, especially among young people. The Akita Inu, for example, had its hour of glory in Hollywood with the film Hatchi relating the true story of this dog who, in the 1930s in Tokyo, waited every evening for several years for his master – who died at the station at which he used to meet him. These Japanese dogs are therefore legendary and kawaii (cute), hence their success.

Faced with this craze for the Shiba and the Akita, we unfortunately also deplore a growing number of abandonments. Emmanuelle Demouliez has been president of the Akita Home association, based in Loire Atlantique, for more than 10 years; it takes care of more than 300 Japanese dogs per year: “96% of abandonments or difficulties encountered with Shiba and Akita could have been avoided. These are people who have not taken the measure of a life with a dog over 15 years, but also a lot of casting errors. These dogs are definitely not for everyone: they should never be sold in pet stores or puppy shows.” Shiba and Akita are so-called “primitive” dogs: very instinctive, hypersensitive and reactive, they will never obey the finger and the eye. They will act according to their interest and rarely to please their master. So, when such a character is that of a 50 kilo dog like an Akita, it is better to think twice.

Anything but a stuffed animal

Laetitia Coral, 32, is the owner of two Akita, Yuki and Yume, a male and a female, and passionately shares her experience on social networks or her blog www.akitathereallife.com. “The Akita is not a family dog. He goes through the communication ladder very quickly, growls easily and bites happen much faster than with another dog. Good knowledge of canine communication is essential to anticipate and act wisely”. For the Akita as for the Shiba, quality socialization is a real issue, because relations with congeners can be stormy, especially for animals of the same sex. So yes, these dogs take work, time, consistency and consistency. The plush appearance of the Shiba should never overshadow its behavioral characteristics.

For Emmanuelle Demouliez, when you embark on an adventure with a Japanese dog, you have to have in mind a kind of bushido code, the moral rules of samurai: “To be a good master, you have to be respected and respectable”.