Restaurant review | At Saint-Pierre: the subtleties of the river - DALTONHURD Skip to content 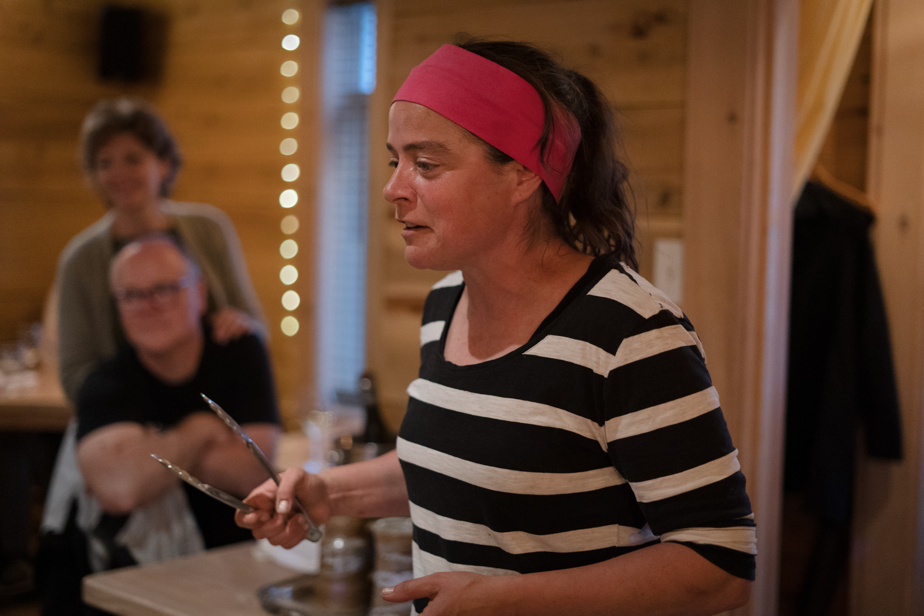 Through the good shots and, sometimes, the not so good, our restaurant critics tell you about their experience, introduce the team in the dining room and in the kitchen, while explaining what motivated the choice of the restaurant. This week: Chez Saint-Pierre, at Bic, in a revisited formula.

Why talk about it?

Chez Saint-Pierre’s dining room was closed for two summers, “replaced” by red containers in the parking lot of the church opposite. The Coastal Canteen is still active during the beautiful 2022 season, but you can finally sit down inside again, to live the brand new experience offered by the famous Bic restaurant, open since 2003.

Activist leader Colombe St-Pierre needs no introduction. His talent, his verve, his defense of the river’s fisheries (Manger notre Saint-Laurent) and his presentations on the difficult conditions of restoration, especially in the regions, not to mention his wigs and his collection of glasses à la Elton John, make she is a favorite personality of Quebecers. Supported in the dining room and in the shadows by her husband Alexandre Vincenot, the mother of three daughters can also count on a helping hand from her eldest in the service and on a kitchen team dedicated and motivated to follow the chef in her delirium.

” Experience “. The word is particularly well chosen to talk about Chez Saint-Pierre, version 2022. The team has decided to do things very differently this summer, with an imposed formula, which aims to avoid many headaches in the kitchen and to renew the concept for curious diners.

It’s not the first restaurant to take this event-driven approach. Faux Bergers, Le Mousso and Parcelles, among others, have also chosen the unique menu and table, with a little staging to present the dishes and products. At Bic, there is even a service that is done on a pedestal table, in the center of the room. If you still doubted that food is also culture, you have to pay a visit to Colombe.

There’s something relaxing – for people who are open-minded and open-mouthed, of course – about not picking one’s dishes. The excitement of discovering the menu on the spot, which includes a dozen items that ALL can be tasted, is part of the charm.

From the aperitif, served at 6:30 p.m., to the desserts, it takes almost four hours. It’s long enough to get to know the neighboring tables or adjacent stools, then exchange impressions.

We will not give you the description of all the dishes. They were, however, not all as memorable as each other. Of course, Colombe is continuing her work of showcasing the most beautiful edibles in her region. His activism for better access to products from the river resulting from sustainable practices also takes on its full meaning when we see that there is only one fish as the main ingredient on the menu, a soft halibut steamed with wintergreen, which the chef had to pick it up herself at the last minute in Matane.

But we also taste oysters, the delicious Gaspé William B oysters, which are well highlighted by a refreshing garnish of cucumber, white spruce and wild mint. Other St. Lawrence products appear here and there during the meal, very subtly, whether it’s the sea parsley emulsion in the beautiful green plate of fiddleheads, the dulse that tops the eggplant, itself spread XO sauce made from scallops and prawns, or “bonito Qc” made from the dehydrated blood line of a tuna. In short, the river expresses itself more in a succession of “condiments” than in a great feast of the sea, perhaps less fashionable in times of overfishing.

Besides, expect a certain eclecticism on the menu. Some may be surprised, for example, to be served tofu and Tonkinese soup (with an exceptional broth, that said!), at a so-called “gourmet” table in Bas-du-Fleuve. Is this what Colombe calls the democratization of gastronomy? One thing is certain, at $125 per person, it remains accessible… and good… and fun. But the runners of large tables who seek at all costs the “Wow! at each service may not find it here.

Raphaële Bérubé left Montreal, where she held the position of sommelier at Mousso, to be closer to her hometown, Matane. His salivating wine selection for the evening is displayed on the buffet in the dining room. There are several options by the glass. During the evening, it happens that Raphaële feels inspired and brings out other nuggets from the cellar. The agreement is free and instinctive. You can also choose to order by the bottle. In short, there is no fixed formula for liquids. However, there is a philosophy: artisan cuisine must be accompanied by artisan wines. So we drink Nival (Quebec), Pierre Frick (Alsace), Yann Bertrand (Beaujolais), Lise and Bertrand Jousset (Loire), as well as fine cuvées from small Italian, German, Spanish houses, etc.

As in the past, the restaurant is full until the end of the season, but you can add your name to the waiting list. It is not uncommon for places to become available. As proof, the two couples sitting at the counter with us had their places a few days before the meal.

Chez Saint-Pierre is open in the evening, from Wednesday to Saturday, until October.