pole for Verstappen ahead of Alonso, Hamilton 4th - DALTONHURD Skip to content 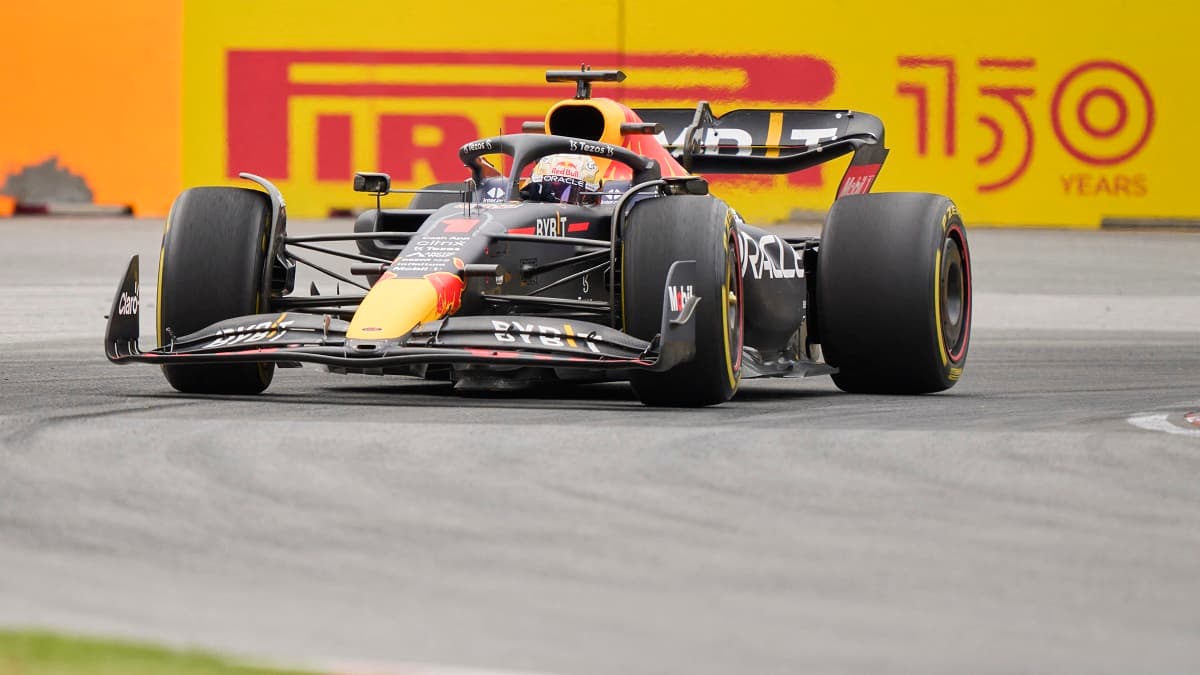 The top 10 of these qualifiers

Alonso is on the front line for the first time in ten years.

Max Verstappen set the fastest time ahead of Fernando Alonso and Carlos Sainz. Hamilton can smile again, he is fourth. Ocon set the 7th fastest time.

Best performance of the season for Alonso!

Verstappen improved his time even more, beating Sainz who was eight tenths behind the Dutchman. Alonso is second, he has just chased Carlos Sainz from the front row.

Hamilton is in his last attempt, he currently holds the second time ahead of Sainz.

Russell lost control of his car, which came to rest against the barrier. The Mercedes returns to the track under the eyes of Toto Wolff. Verstappen takes pole position in 1’21″620.

Very daring bet from George Russell who puts on slick tyres. Verstappen improved his own mark by half a second in a single sector. The drivers are getting faster and faster with three minutes left in Q3.

The best time for Verstappen, good performance from the Alpine and the Haas

Hamilton (Mercedes) saves his place on the wire, as does Esteban Ocon. The two Alpines are in Q3. Excellent performance by Haas riders. Schumacher signed the 6th time. Verstappen set the fastest time ahead of Alonso and Russell.

The eliminated in Q2: Bottas, Albon, Pérez, Norris (no time), Leclerc (no time).

Hamilton in the red zone

Hamilton is 11th with less than a minute remaining.

Russell and Hamilton are closing in on the time set by Verstappen. Sainz regained the upper hand, but Verstappen improved in stride. Less than a second separates the first three.

Magnussen improved Fernando Alosono’s time at the moment, Albon did the same, while Verstappen lined up one sector after another.

The clock has started again, there are a little less than eight minutes left in Q2.

The session will resume

While waiting for the session to resume in just over four minutes, the clock has gone back to 9 minutes.

Albon also made a mistake

Sergio Pérez missed the turn. His car went straight to complete its race in the barriers. The Mexican did not manage to resume the race. The single-seater was finally able to be extracted. Albon also hit the barriers, just before the Red Bull driver, but the shock was lighter and the consequences less for his Williams.

The provisional best time for Alonso

Crash of Sergio Pérez, the session is interrupted

The red flag is out after Sergio Pérez crashes, the session is interrupted. The clock is stopped at eight minutes.

“A brake problem when we stop to start again. We have one of the brakes which has completely died out. We also decided to change the tyres. I think it was not the right option. I am Very disappointed. This morning we had the best time in the rain, everything was looking good and we missed out on this qualifying. We will have to sit down tonight and look at the strategies.”

The two Alpine and Haas drivers opted for intermediate tires at the start of Q2, they hope to take advantage of a drier track than in Q1.

Disappointment for Pierre Gasly, released in Q1. The Frenchman was second in the last free practice session contested in the rain.

Max Verstappen improves in turn and steals the best time from Carlos Sainz, Leclerc is third.

Alpine at the top

Ocon inserted himself between the Spaniards Sainz and Alonso. The Ferrari driver keeps the fastest time.

Less than five minutes in Q1

Less than five minutes into this Q1, only Tsunoda is in the pits. Leclerc and Russell improved, the latter set a sector record. The conditions remain dantesque.

The veteran of the field is placed in front of the pack but he is immediately beaten by Carlos Sainz in 1’32″781.

Alonso aligns sector records but never goes to the end of his lap for the moment, the Spaniard is in the red zone.

Gasly in the right rhythm

George Russell currently has the best time so far in 1’36″6. Hamiltonle follows closely (+0″988). It hasn’t happened so often this season.

The rain complicates the task of pilots

The pilots encounter various problems due to the rain. The track being waterlogged, the first 5-6 minutes will be complicated before experiencing an improvement. Visibility is less in this fog but the drivers have to drive to warm up the tyres, which are difficult to warm up in these conditions.

It started in Q1

The first cars set off in the rain, in particular the Mercedes drivers who are experiencing another complicated weekend.

Alosno the strongest in the rain

Spanish veteran Fernando Alonso (Alpine) dominated the last free practice session of the Canadian Grand Prix, in the rain, ahead of Frenchman Pierre Gasly (AlphaTauri), Saturday in Montreal, before qualifying which was also likely to take place on wet track.

Charles Leclerc will start at the back of the grid on Sunday at the Canadian Grand Prix in Montreal, Ferrari having decided on Saturday to change parts of its engine again beyond the limit authorized per season.

Monegasque Charles Leclerc will leave with ten penalty places at the Formula 1 Canadian Grand Prix on Sunday, Ferrari having decided on Friday to change an element of its single-seater beyond the quota authorized per season.

Before the first session, a first battery of changes had been announced on the single-seater of the 3rd in the championship. These new coins were within the limits allowed throughout a season.

But at the end of the day, while Leclerc had taken the 2nd fastest time in the second free practice session just behind the championship leader Max Verstappen (Red Bull), an FIA note mentioned a new change for the Ferrari , this time concerning the engine control electronics.

However, this element is the 3rd of its kind used by the Scuderia since the start of the season, beyond the two authorized per season. For this offence, the rules provide for ten places of penalty.

For Lewis Hamilton (Mercedes) on the other hand, the setbacks continue with a 13th place only during the second session. The Briton complained of an “undriveable” car as his team tried a new solution on their floor.

Max Verstappen took control of the weekend on Friday after the first two free practice sessions for the Canadian Grand Prix in Montreal. Leader of the championship, the defending champion is the favorite for this 9th round of the season. In front of the already full stands of the Gilles-Villeneuve circuit, the Dutchman from Red Bull was the fastest.