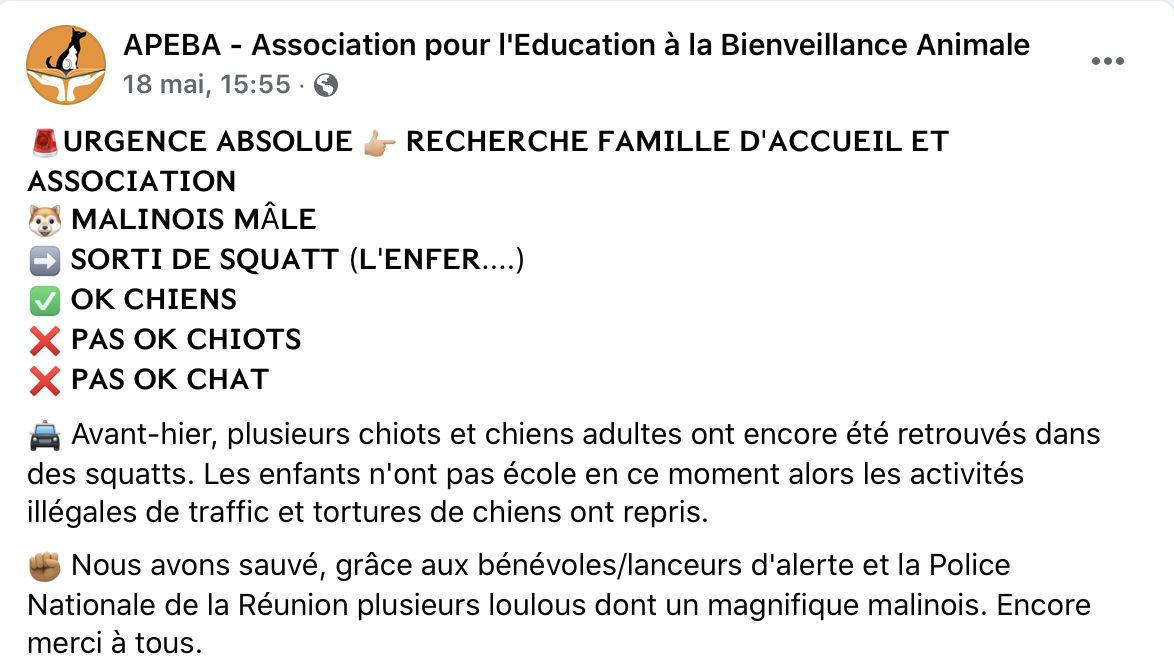 Last Wednesday, the Association for Education in Animal Benevolence (APEBA) intervened again in Saint-Denis to recover dogs in a squat. This association has been dealing with this kind of situation for several years. The process always seems to be the same: children, quite young, kidnap stray dogs in the street to bring them to unoccupied houses. The animals would then be used for torture games.

The association intervened in several squats to save these dogs. First, Allée du Bec Rose, where the APEBA found two puppies. The volunteers then went to Route de Bois de Nèfles and spotted 5 puppies and three adult dogs. All of them were recovered by the association thanks to the intervention of the municipal police of Le Chaudron. And as if the list wasn’t long enough, last Friday two more dogs were discovered by the police. In all, over the past few weeks, no less than twenty animals have been recovered, including 5 seized by the police and the others “sub associations”. As such, APEBA “thank” enormously the associations of PA who take care of the rescued dogs and offer them a new life with adopters!

These operations were carried out within the framework of the partnership with the authorities which led to the creation of a GPO, an Operational Partnership Group specifically dedicated to the problem of animal abuse and cruelty in the district of Saint-Denis.

Stories like this, APEBA unfortunately experiences far too often. “We send an email to the police every two weeks to tell them that there are dogs”reports Cécile Squarzoni who salutes the collaboration of the National Police. “But the problem with these squats is that, for example, the one on Bec rose alley, reported for 3 years, is still not closed”. The association also indicates that it has sent the town hall a list of 20 squats, which had led to the immurement of some, but the problem is far from being resolved.

“The town hall only intervenes on the squats of which it finds the owners”, indicates the president of APEBA, who specifies that a prefectural decree also weighs on one of the reported places. However, given the magnitude of the phenomenon, it is difficult for volunteers to witness these repeated discoveries. “On one of the squats, three years ago, there were already dogs and, again, it is still accessible, so are they really looking for heirs?”, we ask in the animal protection community.