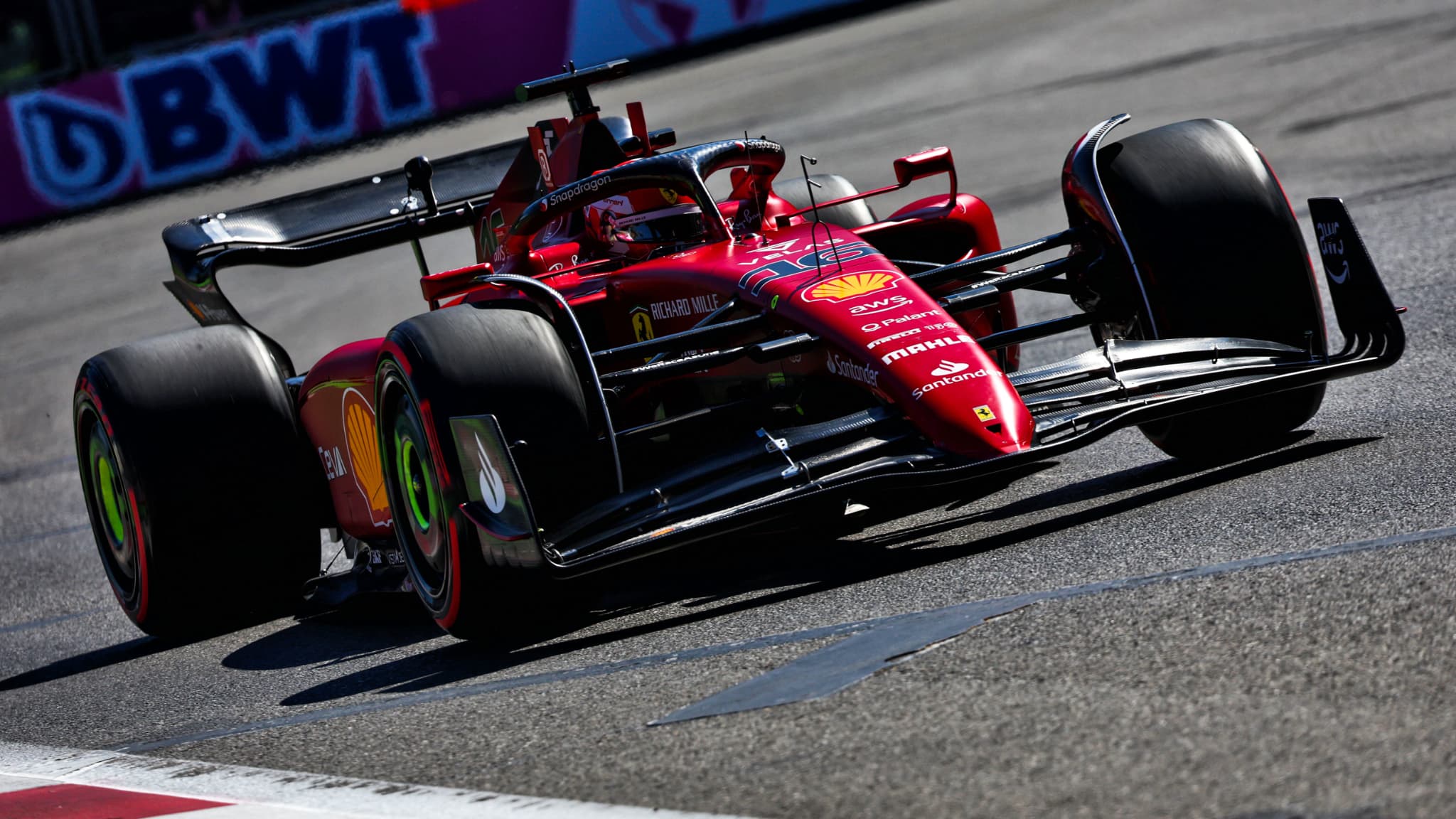 Leclerc did not expect it

Charles Leclerc on his pole position on Canal+: “I didn’t expect this one, we thought the Red Bulls would be stronger. I’m very excited for tomorrow. The tires will be the key. It will be interesting to see if we can handle them well.”

Sergio Perez on Canal+: “In Q3, that’s where we give everything. I hit the wall in some places. We had a little problem with the engine. Charles had a very good lap. The race will be long tomorrow.”

Charles Leclerc (Ferrari) took pole position in the Azerbaijan Grand Prix. The Monegasque is ahead of the Red Bulls of Sergio Perez and Max Verstappen. He signed his 15th career pole, the 6th of the season. Pierre Gasly will be in 6th position on the starting grid on Sunday in Baku.

Q3: the Ferraris return to the pits…

… the Red Bulls too. The end of these qualifications promises to be thrilling.

The Ferraris are in the game with the best provisional times for Sainz and Leclerc. There are still 6′ left in this Q3.

Albon is angry with Alonso

“It’s frustrating, he made sure that no one could make a time”, railed on Canal + Alexander Albon about Fernando Alonso. The Williams driver, eliminated in Q1, blames the Spaniard for having prevented him from overtaking during the restart, after the red flag.

Let’s go for Q3 and the fight for pole

The ten drivers competing in Q3 have 12 minutes to seek the best place on the grid and why not pole!

Q2: The eliminated pilots are…

Less than 5′ from the end of this Q2, the Frenchman from Alpine only has the 12th fastest time.

Seventh fastest in this Q2, the German made another mistake in a corner. Definitely the Aston Martins are not at the party in Baku.

Q2: Ferraris in the game

Sainz and Leclerc have the two fastest times so far. There are 9 minutes left in this Q2.

The 15 qualified drivers have 15 minutes to climb into Q3. Who will be the ten drivers in the race for the pole?

Q1: The five eliminated pilots are…

The drivers are back on the circuit for the end of this Q1.

The time to evacuate the Aston Martin from Stroll and the drivers will be able to finish this Q1. There are 2’30 left to warm up the clock.

2’30 from the end of this Q1, the red flag came out due to the crash, the 2nd in a row, of Lance Stroll (Aston Martin). With breakage this time.

After Vettel it was the turn of his teammate Lance Stroll to miss a turn and crash into the barrier, fortunately without consequence for his single-seater.

Q1: the five pilots in danger

At 5 ‘from the end of this Q1, are for the moment eliminated: Schumacher, Stroll, Latifi, Bottas and Albon.

Q1: a straight for Vettel

Current 11th in this Q1, the German shot straight with his Aston Martin in a turn.

The Red Bull driver completed a lap in 1’42”938. Verstappen is ahead of his teammate Sergio Perez and Charles Leclerc (Ferrari).

The British driver is already having difficulties with his Mercedes. Little scare for Norris in turn 6.

Qualifying has started. It left for 18 minutes in this Q1. The five slowest drivers will be eliminated and will not participate in Q2.

The Mexican Sergio Pérez, winner two weeks ago of the GP of Monaco, dominated free practice 3 of the GP of Azerbaijan. The Red Bull driver was ahead of Charles Leclerc and Max Verstappen.

Sergio Pérez’s victory in Monaco did not only generate positive vibes at Red Bull. Shortly after the race, Jos Verstappen felt that his son Max, who came 3rd, had “not been helped” by the team’s strategy. “I would have liked it to be different for the leader of the championship”, dropped the father of the Dutch world champion, even considering that “ten points were wasted” on the Monte-Carlo track. It is in this context that the boss Christian Horner took the floor, during an interview with Bloomberg, in order to publicly recall that the interests of the team took precedence for the moment over those of the pilots.

“It’s not Sergio Pérez Racing or Max Verstappen Racing, it’s Red Bull Racing. They work for the team, they have a responsibility. They drive a c
ar designed by around 800 employees here and produced for them. They are an important link in the chain, but it is vital that they are aware that the ambition of the team is greater than theirs,” he said.

Gasly’s questions about his future

On the sidelines of the Azerbaijan Grand Prix, AlphaTauri driver Pierre Gasly spoke about Sergio Perez’s contract extension at Red Bull. A deal that could block the future of the French within the Austrian parent company.

“Of course, it affects me, he said on Canal +. For the rest with Red Bull, my contract is quite clear with them. We know the options. We will have to see how we can continue together. discussions are ongoing.”

For the eighth round of the Formula 1 world championship, the paddock has an appointment in Baku this weekend for the Azerbaijan Grand Prix. Follow the qualifications this Saturday from 4:15 p.m.