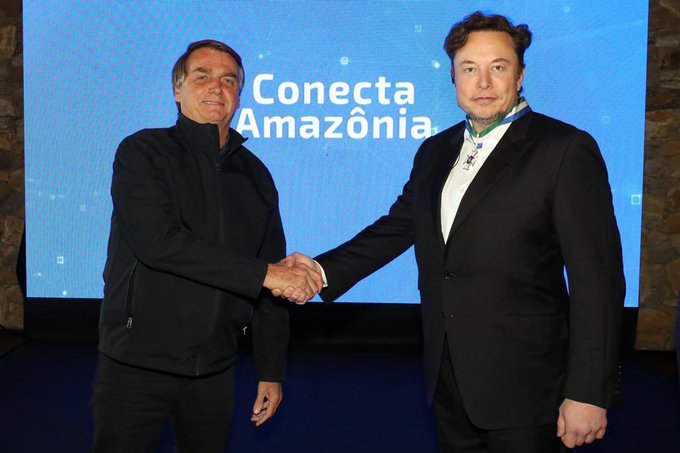 The businessman’s SpaceX company will deploy the Internet by satellite above the Amazon rainforest, and wants to fight against deforestation.

Elon Musk has other occupations than Twitter. Having visited Brazil on May 20 to discuss with President Jair Bolsonaro, the billionaire announced the launch of a program that will connect the Amazon and detect illegal deforestation there. “I’m super excited to be in Brazil for the launch of Starlink for 19,000 unconnected schools in rural areas and for environmental monitoring of the Amazon”has tweeted Elon Musk.

The businessman was invited to Brazil by Communications Minister Fabio Faria: “As we are going to connect the Amazon, we have brought in one of the greatest business leaders in the world to help us with this mission”, he said on Twitter. Specialized in the field of astronautics and space flight, the businessman’s company SpaceX will deploy the Internet via satellite above the Amazon rainforest. Negotiations for this deployment were announced in November by the Brazilian government.

Using technology to protect the Amazon

The Amazon is going to be connected using the Starlink service operated by SpaceX. It allows residents of areas poorly served by fixed and mobile networks to have access to high-speed Internet, through thousands of small satellites. At the end of February, terminals of this service arrived in Ukraine to help the country suffering from Internet cuts since the Russian invasion.

The Amazon is a hot topic in Brazil, with deforestation steadily increasing since Jair Bolsonaro came to power. It would have increased by around 22% between August 2020 and July 2021. This meeting is a way for the president to show off when he is accused of having weakened the monitoring of Amazonian ecosystems and defended extractive activities in the protected areas. “We are counting on Elon Musk to make the Amazon known to everyone in Brazil and around the world, to show the exuberance of this region, how we preserve it, and what harm is done to those who spread lies about this region”he explained.

Jair Bolsonaro also welcomes the takeover – temporarily suspended – of Twitter by the businessman. At the event, he said it represented a “breath of hope” and called the billionaire a “legend of freedom”. If Elon Musk is seen as a hero, it is because he assured that moderation would be less restrictive in the name of freedom of expression. Several of the Brazilian president’s posts have been deleted on social media for disinformation, including on Twitter. Which should no longer happen when the billionaire owns the platform.