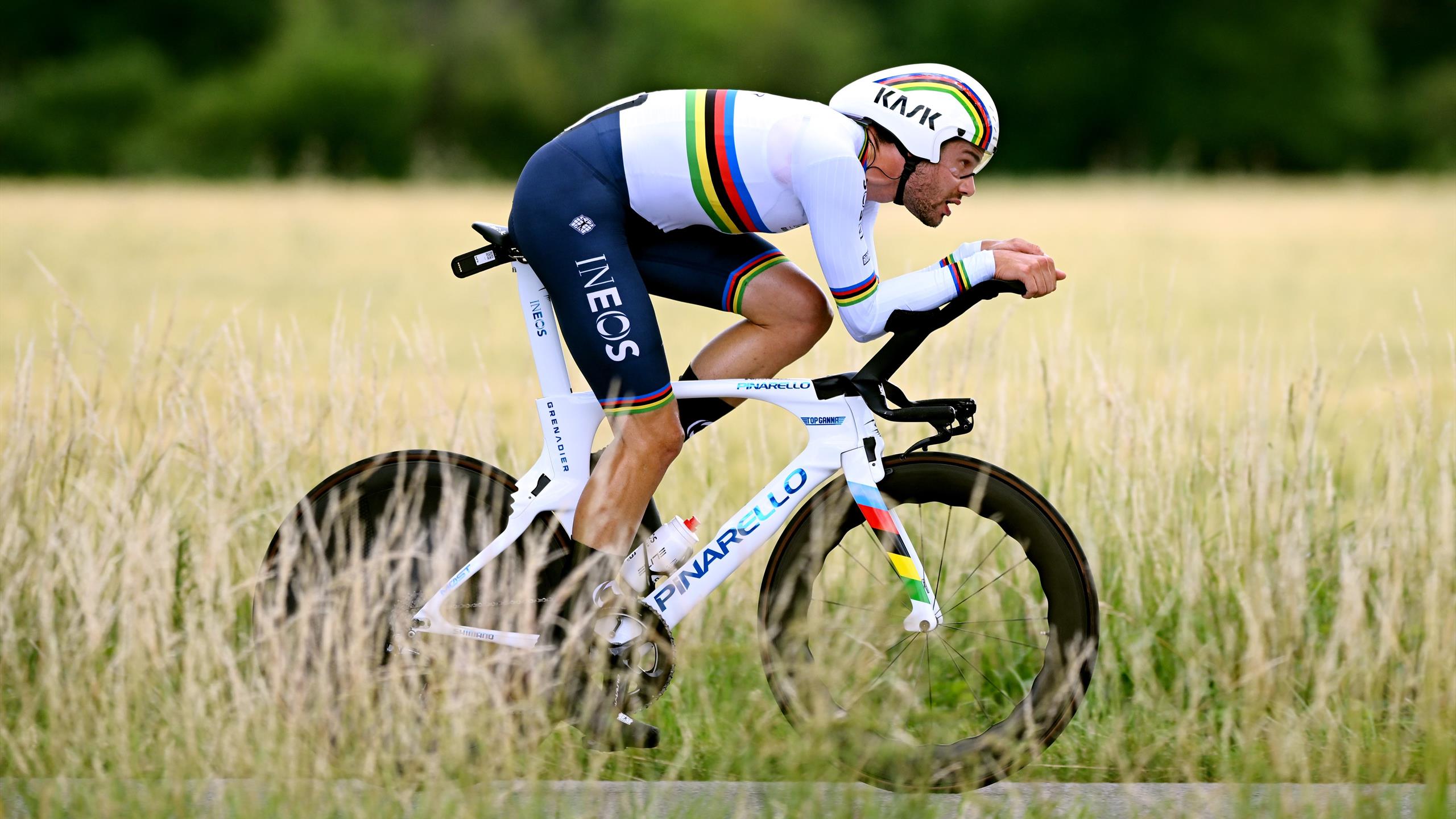 We expected a duel between Wout Van Aert and Filippo Ganna and we got it. Starting off very strong, the Belgian from the Jumbo-Visma seemed able to win for a long time but he finally had to bow, narrowly outstripped (+ 2”) by the Italian world champion, who offered his 4th victory of the season, the fourth in the solo exercise. His teammate at INEOS Grenadiers Ethan Hayter completes the podium (+ 17”). Despite everything, Van Aert consolidates his leader’s yellow jersey since he now has a 53” lead over Cattaneo (QuickStep-AlphaVinyl) and 56” over his leader Primoz Roglic, who took advantage of the clock to regain at least 40” to all climbers.

Days go by and disappointments follow for Wout Van Aert. Narrowly beaten on Tuesday by David Gaudu on the 3rd stage when he thought he had won, even raising his arms, the Belgian was again narrowly beaten on the 4th stage. This time, no “failure” on the finish line but perhaps even greater disappointment as the yellow jersey seemed to have the cards in hand. Starting very strong, the vice-world champion in solo exercise took advantage of a first technical part to take a substantial lead over Ganna, pushed back to 11” after so many kilometres. We then thought Van Aert launched towards success but it was not.

“Roglic is catchable, Gaudu has an interest in taking advantage of it”

Ganna relieved: “With Wout, we are always very close to each other, of course I was afraid”

Despite an efficient and powerful style, the Belgian stuck in the second part, where Ganna’s perfect position gave him a significant advantage against the strong wind that blew on Wednesday between Montbrison and La Bâtie d’Urfé. It was in this section that the Italian won the time trial, taking 22” from Van Aert, despite being faster on the other two sections. But it was not enough. Even if the Belgian picked up the pace in the final, where he took over the 3rd from General Victor Lafay (Cofidis, + 4’20 ”) who started four minutes before him and nine seconds to the Italian world champion INEOS Grenadiers .

After the half wheel at Chastreix-Sancy, it was 2” which separated Wout Van Aert from victory this time. Having left much earlier, when the road had not yet completely dried, Filippo Ganna therefore enforced the world hierarchy to offer himself his 4th success of the season, the first of his career in the Dauphiné.

Gaudu limits breakage but less than others

In the absence of victory, the Belgian from Jumbo-Visma at least consolidates his yellow leader’s jersey. Here he is now 53” ahead of Mattia Cattaneo (QuickStep-AlphaVinyl), excellent 4th (+ 39”) in the clock, enough to see coming in the coming days. The day was also very good for the whole of Jumbo-Visma with the big performances of the two leaders, Primoz Roglic and Jonas Vingegaard. Back after his knee injury, the Slovenian reassured his condition by taking 5th place (+ 42 ”) in the clock, two rows and thirty seconds ahead of his Danish teammate (7th, + 1’12 ”). The two men are now the two best-placed favorites overall (3rd at 56” and 4th at 1’26”), even if the climbers did more than limit the breakage.

Winner on Tuesday and 2nd overall at the start of this time, David Gaudu confirmed his progress in the exercise by taking 23rd place in the stage, 1’59” behind Ganna. A disbursement certainly substantial mathematically but the Frenchman has more than limited the breakage, even if he concedes time on this time trial to Enric Mas (Movistar, + 1’53 ”), Ben O’Connor (AG2R Citroen , + 1’46 ”), Juan Ayuso (UAE Team Emirates, + 1’34 ”) or Tao Geoghegan Hart (INEOS Grenadiers, + 1’31 ”). The “Little Prince of Brittany” has logically fallen back in the general classification (12th at 2’03”) but he remains in the game for the final victory, or at least for the podium, with a minute behind Primoz Roglic, first of the favorites. But it will already be necessary to consider dismissing Wout Van Aert, more than ever in yellow on this Dauphiné.

The spite of McNulty, repaired (too?) slowly

The profile of the 5th stage: a stage of “road-sprinters” for Groenewegen or Van Aert?

Cavagna disappointed, but not defeated: “It’s a bit complicated this year, but it will come”