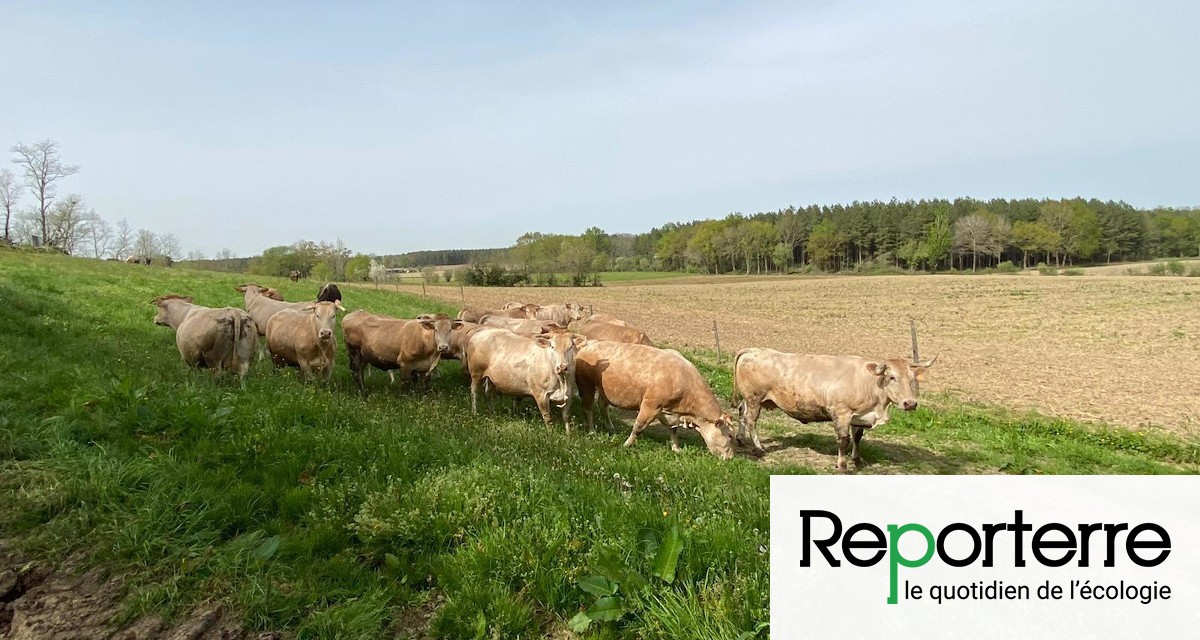 “ A cow that is too hot, you can see it right away. She has trouble breathing, like us when we’re out of breath ; they say she pumps. She is not comfortable »explains Loïc [1] at Reporterre. Since the beginning of the heat wave, the cattle breeder, installed in a Farm with limited liability (EARL) on 150 hectares (ha) in Tilh (Landes) with his parents, goes every two hours to visit his 35 mothers and 50 fattening cows. So far, everyone is fine, but the breeder remains very vigilant. “ I prefer to intervene before one of them is down. I check that they are drinking enough. Saturday is going to be very hot again. We’ll see. »

Friday June 17, the Landes went on red alert “ absolute » heat wave, like thirteen other departments in the south-west quarter of France. Temperatures were expected to exceed 35°C, or even 40°C locally, such as around Mont-de-Marsan. In the approximately 800 cattle farms in the department, mainly specializing in beef cows, breeders and animals stick out their tongues. In an article published on Wednesday, the specialized information site Web-agri warned of a “ fatal thermal risk » for cattle on Saturday in the Landes. Since Wednesday, as in all the other departments in orange and red vigilance, the transport of animals has been prohibited between 1 p.m. and 6 p.m. to at least spare the animals the furnace of the cattle trucks. To deal with this, the Hagetmau slaughterhouse had to bring teams back in the evening to welcome the animals which arrived much later than usual.

The major risk for animals is heat stroke and its share of very serious complications – neurological problems, cerebral edema, kidney failure. Veterinarian specializing in cattle based in Amou, Dr Alizé Duhalde observes that the number of calls for medical reasons increases during heat peaks. She also encountered her first serious case on Thursday morning – a two-month-old blond Aquitaine calf. “ The breeder called me because he remained prostrate, lying on the ground, with heavy and panting breathingshe describes to Reporterre. I went there as quickly as possible, because it is a vital emergency. » When he arrived, the animal was very dejected and sweating a lot, with severe breathing difficulties and almost blue mucous membranes. His body temperature had soared to 41.5°C, instead of the 39°C usually seen in calves his age.

Immediately, the vet and the breeder gave him shock treatment to save him. “ We doused him with a garden hose and applied wet sheets to his back. I also perfused him intravenously to bring him sugar and rehydrate him — he hadn’t suckled his mother since the day before — but above all to rinse his liver and kidneys, which were suffering enormously from the heat. We also gave him anti-inflammatories to shock him and supportive treatment for the heart, which was beating very quickly but very weakly. », says the veterinarian. Friday afternoon, the calf was a little better but was not out of the woods yet.

“ In some buildings where ventilation is poor, the mercury can easily rise above 40°C »

Nothing let predict this collapse of the animal. The building, well ventilated, was in the shade. The other calves in his barn did not seem to suffer too much. In the affected calf, the veterinarian suspects a heart problem that has not been detected until now. This is the perverse effect of extreme temperatures, which can cause the weakest animals to suddenly decompensate. “ The problems appear especially on animals already weakened in addition »confirms the colleague of Alizé Duhalde, the Dr Guillaume Habert. Most often, these are very young calves or calves suffering from diarrhea or dairy cows in intensive production or fattening. Breeding conditions can also precipitate the onset of disease. “ In some buildings where ventilation is poor and where animals and manure produce heat, the mercury can easily rise above 40°C or even 50°C. »recalls the veterinarian.

Fortunately, prevention generally remains effective. And extensive models seem to show their superiority over intensive farming. “ In the Landes, there are not many intensive dairy farms. Generally, the animals go out a lot and the meadows are shaded »appreciate the Dr Duhalde. As part of its protected geographical indication (PGI) Chalosse beef, Loïc leaves his cows outside for eight months of the year. “ They obviously have access to stables but they appreciate being in shady meadows, under the trees. », observes the breeder. When the associates launched the fattening workshop in 2015, they were also keen to adapt the buildings, building them large enough for good ventilation. And carefully prepare the torrid episodes. “ We cleaned out the building last week to avoid overheating the manure and we offered the cows a cure of vitamin C, homeopathy and trace elements at the start of the week. », says Loïc. Supplements that do not act directly on the effects of heat, but according to him strengthen the animals to help them through the episode of heat wave.

Installed on 150 ha with two partners in Nassiet, François Souarn has noticed that his herd of 120 cows has resisted the heat better since the start of the conversion to organic in 2018. “ Cows eat less richly, produce less milk and are therefore less stressed by heathe observes. Before, as the temperatures rose in the building, they clustered together and seemed uncomfortable. Ten or fifteen years ago, I even saw some of them sticking out their tongues and gasping. I have never observed this behavior since. »

Still, global warming will become an increasingly difficult challenge to meet in the years to come, believes Loïc. “ You have to anticipate, prepare. What bothers me today is that we only worry about the heat when it’s already there. Consideration should be given to the multiplication of these peaks as soon as young people settle in, the construction of buildings and the organization of slaughterhouses. »

Subscribe in less than a minute to receive a selection of articles published by Reporterre.

[1] The breeder did not want his last name to appear in the article.