Corentin Moutet and Diane Parry bring smiles back to the tricolor camp, Swiatek and Nadal unfold - DALTONHURD Skip to content 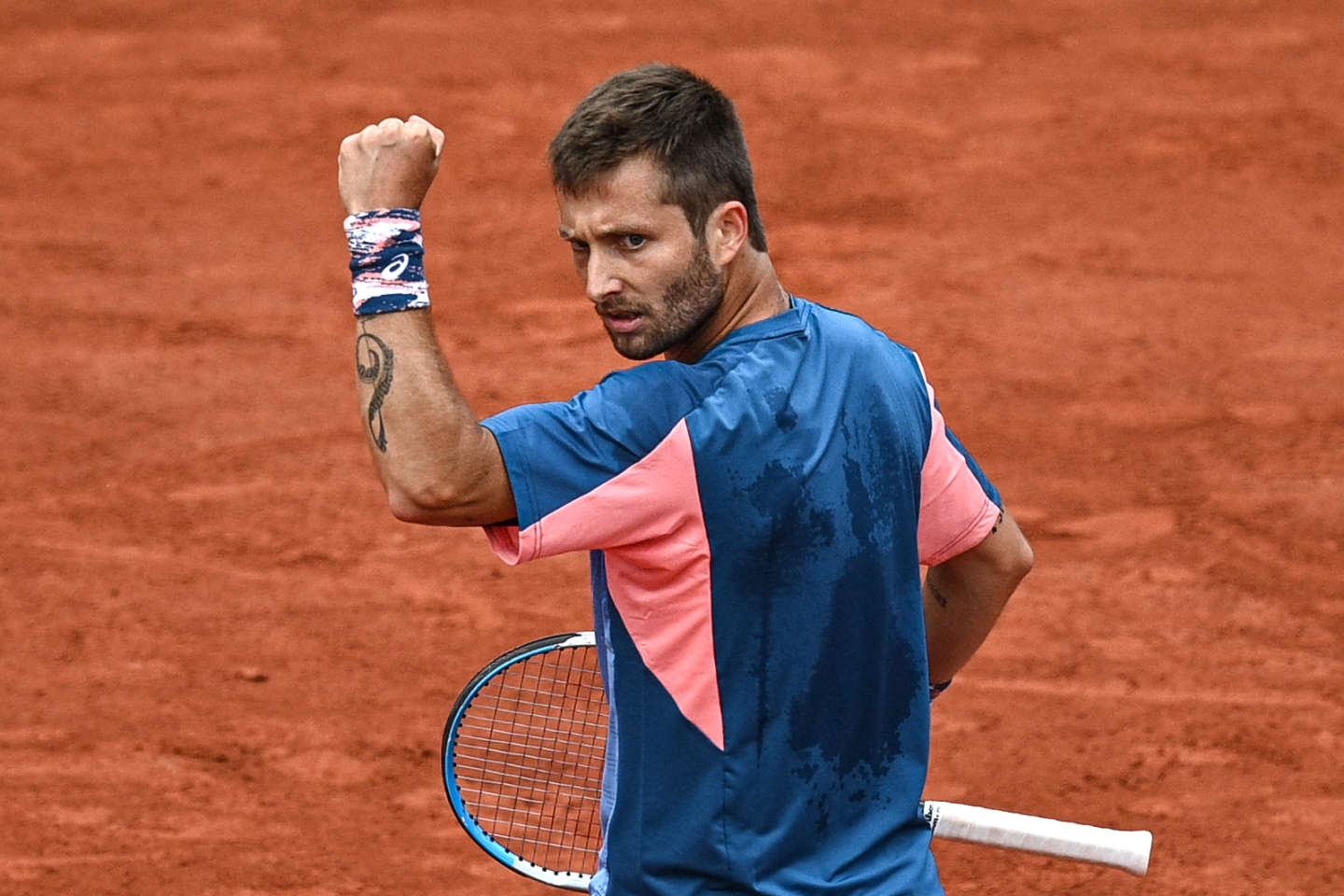 Heads, and not the least, fell on Monday May 23, during the first matches of the second day of the Roland-Garros tournament, Monday May 23. Among the men, the French Corentin Moutet dominated the Swiss Stan Wawrinka (2-6, 6-3, 7-6, 6-3). He will find Rafael Nadal in the next round.

The French Diane Parry created the surprise of the day by leaving, in the first round, the defending champion and world number 2, the Czech Barbora Krejcikova (1-6, 6-2, 6-3). In the women’s draw, the French Léolia Jeanjean and Elsa Jacquemot also qualified for the second round.

In addition, the Japanese Naomi Osaka once again stammered her tennis, while the Polish Iga Swiatek was expeditious.

Corentin Moutet, 23, released Stan Wawrinka, winner of the French Open in 2015, after a disputed match (2-6, 6-3, 7-6, 6-3) on a court Suzanne- Lenglen all committed to his cause. Ranked 139th at the ATP, the left-hander from Neuilly-sur-Seine, who received an invitation to participate in the tournament, was aggressive throughout the game. Often rising on the fly, he put the Swiss under constant pressure. At 37, Wawrinka ended up giving in to the passion and determination of the young Frenchman. In the next round, Corentin Moutet will face the ogre Rafael Nadal on Wednesday.

Without shaking, Rafael Nadal dominated Jordan Thompson 6-2, 6-2, 6-2. Uncomfortable on clay, the Australian did not have the weapons to fight against the Spaniard, who made a perfect entry into the tournament. The Mallorcan, who only spent two hours on the court, did not need to tap into his reserves to qualify for the second round. “I have a lot of room for improvement”, said Rafael Nadal after the match. Returning to competition after a rib injury that has kept him away from the courts since March, he is looking for a 14th victory at Porte d’Auteuil.

In the women’s draw, the big surprise of the day on Monday came from the French Diane Parry, who won 1-6, 6-2, 6-3 in 2:08 against Barbora Krejcikova. After a timid first set, the young Niçoise (19), ranked 97th in the world, managed to break free on the Philippe Chatrier court, covered due to the rain that fell on Paris.

Solid from the baseline, with a one-handed backhand that hurt her opponent, capable of varying the game, the Frenchwoman knew how to keep a cool head when it came to the conclusion. “It’s a dream for me to play on this court with the French public to support me. It’s never easy to start in this kind of match against the world number two. I told myself that I had nothing to lose, that I had to play my game, be aggressive…”, declared Diane Parry at the microphone of France Television after the meeting.

Junior world number 1 in 2019, Diane Parry is having a great season. Clay is his favorite surface. Trained by the Spaniard Gonzalo Lopez, she reached her first final on the WTA circuit in November in Buenos Aires, Argentina. Two weeks later, she won her first tournament in Montevideo, Uruguay.

Other tricolor satisfactions of the day, Léolia Jeanjean, 227th in the world, and Elsa Jacquemot (215th), honored their invitation by qualifying on Monday, for the first time in their career, for the second round of Roland-Garros. Jacquemot defeated Britain’s Heather Watson (103rd) 6-3, 6-3, while Jeanjean beat Spain’s Nuria Parrizas (45th) 6-4, 6-3.

The short stay of Naomi Osaka

It’s already over for the former world number one, Naomi Osaka. The Ja
panese lost in the first round to American Amanda Anisimova 7-5, 6-4. This is not a big surprise since the latter, 28and in the WTA rankings, was recently quarter-finalist in Madrid and Rome.

On the other hand, Naomi Osaka, double winner of the Australian Open (2019 and 2021) and the US Open (2018 and 2020) has only been able to play two matches on clay this season due to pain in her left Achilles tendon, which she manipulated several times during the match. Playing intermittently, the Japanese committed 29 unforced errors and 8 double faults. Far too many to hope to get by against the solid American.

Read also: Roland-Garros: the elimination of Ons Jabeur in the first round, the first surprise of the fortnight

World number one and favorite of the women’s tournament, the Polish Iga Swiatek impressed for her entry into the running on the Philippe-Chatrier court by sweeping in 54 minutes the Ukrainian qualifier Lesia Tsurenko, 6-2, 6-0. In this one-sided encounter, Tsurenko only scored ten points in the first set, and twelve in the second.

Having become world number one after the surprise retirement of Australian Ashleigh Barty in March, Iga Swiatek has been unstoppable ever since. Winner in Doha, Indian Wells, Miami, Stuttgart and Rome, the Pole is now on a series of 29 consecutive wins.

Read also: Roland-Garros: Imperial Alcaraz, the quack of Jabeur, the Berezina of the Blue

As Monday was heavily disrupted by the rain, the program for Tuesday May 24 will be turned upside down by the postponed matches. Many French players should nevertheless enter the running.

On the Philippe-Chatrier court, Alizé Cornet (40th in the WTA rankings) will face the Japanese Misaki Doi (98th). Jo-Wilfried Tsonga, who is playing his last Roland-Garros, will then have a hard time facing the Dane Casper Ruud, seeded number 8.

On the Suzanne-Lenglen, the Russian Daniil Medvedev (2nd) will open the ball against the Argentinian Facundo Bangnis (98th). The French Caroline Garcia (79th) will then face the modest American Taylor Townsend (342nd).