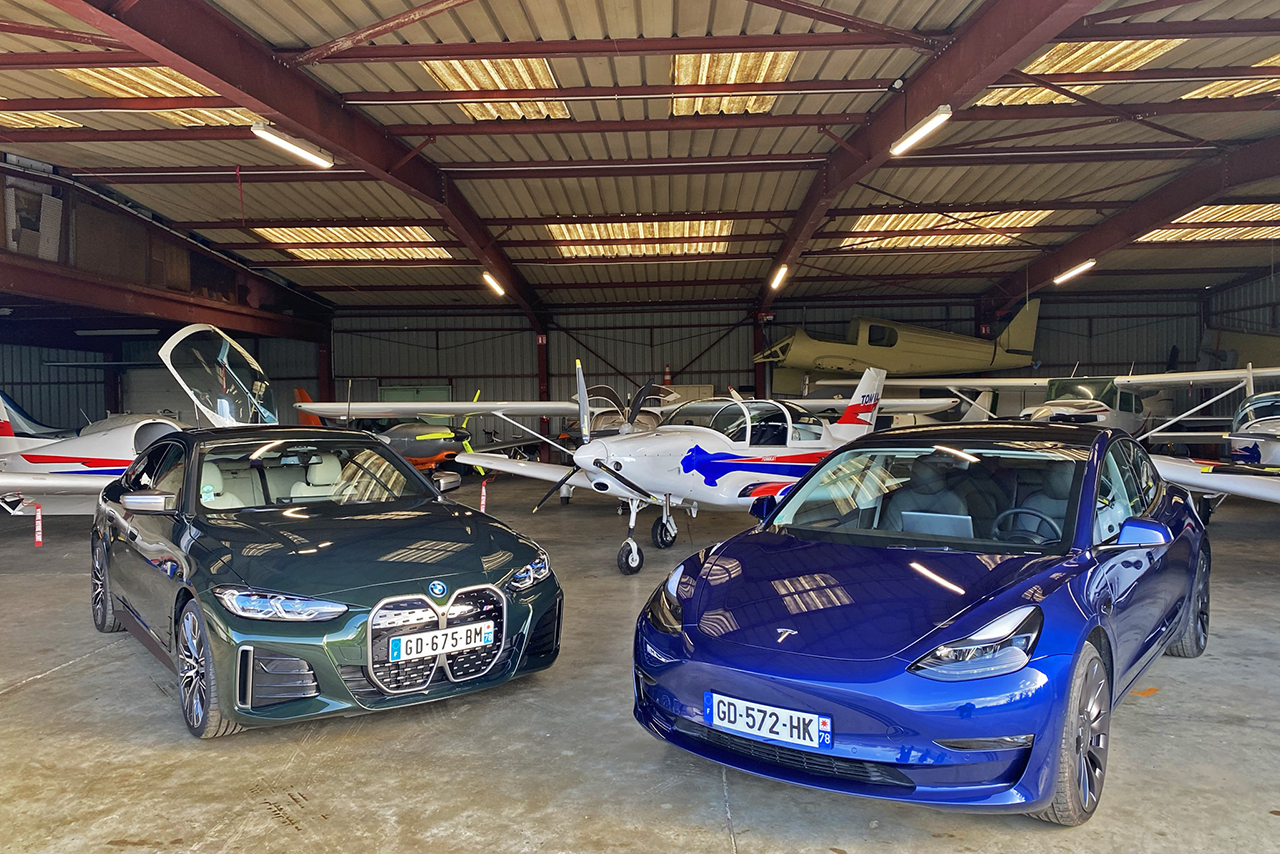 Is the BMW i4 able to compete with the electric reference of the moment, the Tesla Model 3? If we had to make a strictly rational opposition, it would be enough to test autonomy to determine which is the most effective in the matter. But in their high-performance versions, these two models still deserve special attention…

The Model 3 Performance and i4 M50 aren’t just electric, they’re also two sports models and “passion”. To decide between them, we therefore made a short road trip between Paris and Dijon. User experience, life on board, energy management, performance and behavior on the circuit. We have dissected them from every angle. And it starts with a small technical presentation of the forces involved.

On paper, which is the best?

The Model 3 Performance and the i4 M50 currently represent the most powerful versions available in the Tesla and BMW catalog. They each have two electric motors, one on each axle, making them four-wheel drive models.

On paper, the i4 M50 stands out with a slightly higher power (544 hp and 795 Nm against 510 hp and 660 Nm), on the other hand it is the Model 3 which announces the best autonomy (547 km against 521 km). But at such a level of service, are these figures still really relevant? Let’s remember thatthey may be electric, they are positioned as real sports. And overall, no one ever considers a difference of a few horsepower or kilometers of range, before choosing between a BMW M440i and an Audi S5, for example…

Well yes all the same, this comparison remains relevant. Because the Tesla proves to be both more efficient at 0 to 100 km/h (3.3s vs. 3.9s) while consuming less despite its more compact battery (77 kWh versus 83.9 kWh). An advantage which is partly based on its much lower weight (1,860 kg against 2,290 kg). We also discover that the user experience is very different between the two models.

We load the cars!

It’s time to load the cars. Not the batteries, but their boxes. And there, we can already see that the Model 3 – originally designed to be 100% electric – stands out from the i4 which is only a zero-emission version of the 4 Series Gran Coupé.

Indeed, if the i4 has a more practical tailgate than the trunk of the Tesla, its loading volume is more reducedt (470 liters against 561 liters by integrating the double bottom). In addition, the Tesla is distinguished by a second trunk with a capacity of 88 liters under the front hood, while the place is lost on the BMW side. The latter makes up for it thanks to its three-part folding rear seat, offering more modularity. Each has their own advantages.

In the rear seats, same thing. The BMW is very welcoming, offering good interior space and better seating comfort. But on board the Tesla, the absence of a transmission tunnel makes the journey more pleasant for the central passenger.. We especially appreciate the presence of the panoramic glass roof which floods the cabin with light.

Needless to say, style preferences – whether exterior or interior – are completely subjective. Nevertheless, Simon and I have all the same a clear preference for the atmosphere on board the BMW, more upscale and sporty. We also find our brands better.

Thus, the Tesla relies on maximum purification, freeing up large storage spaces. It’s zen… Materials that flatter the eye unfortunately sound hollow. We are especially bothered by the absence of an instrumentation block behind the steering wheel. Especially since it ignores the head-up display, thus forcing you to look away a little towards the central multimedia system.

It is precisely the huge screen that represents one of the most appreciated features of Tesla. And rightly so, since it offers a unique experience, making navigation very pleasant in particular. But BMW’s multimedia system has nothing to envy in terms of fluidity and ergonomics. It therefore remains to be seen in more detail…

Departure of the mini road-trip

Now is the time to start browsing. On the Tesla side, it’s simple! We announce the destination orally and the GPS starts up, displaying that we will have 7% battery left on arrival. The Superchargers are indicated but we know that we will arrive safely without having to reload.

At BMW, on the other hand, the system only offers recharging stops if it finds that it is necessary.… Without clearly indicating the autonomy on arrival either. In short, difficult to improvise. A small system update would be welcome. But let’s bet it will happen soon.

After a few kilometers of town, road and expressway, we also quickly notice that the i4 is much more comfortable. The soundproofing is better, the steering is very consistent, the driving precision is excellent, and above all the filtering of the damping is much better. There is no photo. I have to say that it is the only one to offer several driving modesacting not only on the mechanics, but also on a controlled suspension, allied and pneumatic damping on the rear axle, absent on the Tesla.

In fact, the Model 3 clearly reveals a more dynamic character. The small steering wheel should have given us a hint. Thus, Tesla has apparently compensated for the firmness of the suspension with particularly soft seats. Most of the time very pleasant, except when you encounter a few undulations on the road surface, forcing you to change your driving position to avoid having your head constantly bouncing on the headrest.

Which is the most efficient?

Charging times are also shorter for the Tesla thanks to the ” load capacity max” more important of its battery (250 kW against 205 kW). At least in theory, because the Superchargers gave us the same power as the Ionity terminals.

Until Superchargers are opened up to competition, it is also much easier to manage your trip with the Model 3. Not to mention that breaks are more pleasant thanks to the games and VOD offered in the on-board multimedia system…

Arrival at the Dijon Prenois circuit

It remains to be seen which is the most fun to drive? Because yes, that’s also what sets them apart from their competitors. To tell the truth, Tesla no longer has much to prove in terms of dynamism, with its driving modes which make its models unbeatable in drag-race in the United States. But the i4 meanwhile, simply claims to keep what makes the salt of a real BMW, namely the feeling, the driving precision. And let’s not forget that it has passed through the hands of M Performance!

Facts, with their 4-wheel drive the Model 3 and the i4 both excel at 0 to 100. But which will take the advantage in a 400m standing start? The most powerful or the lightest? The justice of the peace will therefore be the famous circuit of Dijon Prenois. We will finally be able to take full measure of our two supercharged electrics.

Departure ! The Model 3 logically takes the lead. But from around 150 km/h, the power speaks and compensates for the overweight of the i4. It catches up before crossing the finish line in parallel. A totally unexpected result! Especially since the Model 3 has a higher V-max (260 km / h against 225 km / h).

Second round: silence it turns!

We cannot remain on a perfect equality. So it’s time to get down to business with a lap. To do this, Sport Plus mode activated and electronic aids disconnected, the BMW does not seem refractory to the exercise. But Tesla goes even furtherbecause the Model 3 not only offers to adjust the level of intervention of the ESP, it is also possible to finely manage the distribution of power between the front and rear axle, for à la carte behavior, typed traction, or integral, and even pure propulsion!

First curve at the wheel of the i4, we did not expect such a character! The precision of the direction is fully appreciated because the chassis is responsive. By seeking efficiency, the trajectories are clean, even if the weight is felt when entering the curve. But by pushing it to its limits, the beauty still allows itself some nice drifts of the rear axle, even of the four wheels. It’s sporty!

To the side, the Model 3 in integral mode is already much more radical. Cash movements are better contained. Agility is clearly superior. One could believe that she was born for this exercise! But it is by switching to 100% propulsion mode that it reveals another facet of Tesla’s know-how. Never has it been so easy to contain slippage with an electric model. The power is overflowing, the balance is perfect. Clearly on the circuit, it is by far the most sensational, all categories combined!

Characteristics of the BMW i4 and Tesla Model 3