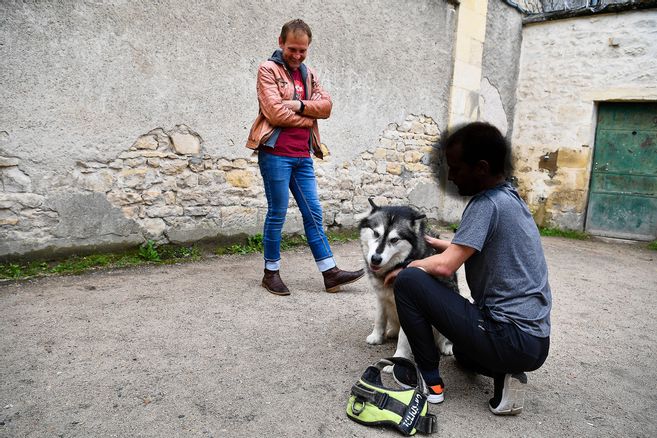 In the small triangular courtyard, a man places hoops on the ground, then approachesIlska, a malamute as imposing as it is kind. He guides her from circle to circle, sometimes rewarding her with a kibble. For an hour and a half, he will make her work, take care of her, cuddle her too, under the watchful eye of Michaël Kitaievitch, animal therapist in Alligny-en-Morvan.

This “patient” like no other is detained in the Nevers remand center and attends these sessions on a proposal from the psychological cell that follows him. “It brings me serenity, it calms me down. It allows me to escape, in quotes. This “parenthesis in the prison environment”, as he describes it, is a novelty in Nevers, after having been tested in many other establishments.

It brings me serenity, it calms me. It allows me to escape, in quotes.

“Animal mediation aims to reduce aggressiveness and behavioral problems”, explains Pascale Vallet, prison counselor for integration and probation, at the origin of the project. For the supervisors, after already nine sessions, the effects were also felt on communication.

“One inmate was very closed. As soon as the first session was over, he started talking to me a lot. It created a catchy subject and broke his defensive posture, ”says one of them. “It’s true that I never spoke,” explains the person concerned. “After each session, I feel good. I love animals and I could make her work all day. So I look forward to each new session. »

premium Meeting with Ouchi, legal assistance dog, who arrived in Nièvre a year ago

Another vulnerable inmate also found comfort there. “There is a complicity that has been created with Ilska. I’m happy because her master once told me “She does that with you but not with me”. I already asked if I could see her again after my release. »

“The objective is to disconnect prisoners from prison to reconnect them to their emotions. It must be experienced as a moment of pleasure. »

For Michaël Kitaievich, practicing in prison was also a discovery, experienced without too much apprehension. “It’s always special but I received a good welcome. Ilska also quickly took its marks. You have to be careful, because these dogs are emotional sponges and that’s why I take breaks of about twenty minutes between two sessions. »

With each detainee, the animal therapist gradually withdraws, to let the relationship settle with the animal. “Then it gets them to verbalize and talk to me. I don’t know why they are there, some tell me. But the goal is to disconnect them from the prison to reconnect them to their emotions. It must be experienced as a moment of pleasure. »

When a prisoner under heavy psychiatric treatment explains after his first session that “it’s better than medication”, it means that the objective seems to have been achieved. It now remains for the prison administration to find the funding to continue these sessions, the last of which is scheduled for July 1.